A new model that would give Barbie body-image issues is hitting the runway. Barneys New York is collaborating with Disney to reveal grossly-contorted versions of Minnie Mouse, Daisy Duck and other classic Disney characters. The cartoons are stretched out, unrealistically skinny, and aimed at young women.

After we launched this petition, we received this message from Risa, a SumOfUs.org member in Vancouver, Canada, about her daughter Celia. We think it shows clearly why this matters so much. After you've read her email, please sign our petition to Disney, so we can make sure this windows never see the light of day. 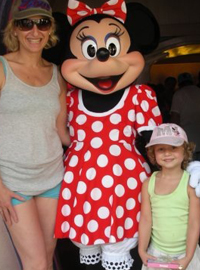 In October of 2007, my 3.5 year-old daughter Celia was diagnosed with A.L.L. leukemia. Within four hours, she was in the hospital, being administered her first blood transfusion.

It was a painful three years on the path to recovery -- living out of the hospital through near death experiences, bone marrow biopsies, blood and platelet transfusions. The chemotherapy. The tears.

It’s almost indescribable how you feel, as a mother, seeing your child locked in a hospital ward, isolated from the rest of the world, in pain and simply hoping for survival. Overwhelming powerlessness doesn’t come close.

But through it all, Celia’s sense of wonderment and joy remained and her imagination kept her strong. She would take refuge in fantasy -- which helps when your immunity is so low you’re denied access to visitors or excursion from the hospital -- and in particular, specific Disney characters. Minnie was her undisputed favorite.

After every spinal tap, Celia would wake from sedation and demand old Disney tapes of Minnie and Mickey be put on. When she lost all her hair, she proudly wore the Minnie cap with ears like so many other kids. When she grew so huge from the life-saving steroids that she could barely walk, she would cling to Minnie Mouse.

After three years of treatment, Celia was cleared for travel, so we packed her chemo in an icebox and went to Disneyland. Wearing hospital masks with a little Minnie face on the front, she demanded we go meet her beloved characters, so she could give them gifts she had made them while in hospital. I was bursting with pride -- my little girl, with so much courage and more than a little help from Minnie made it through her fight with cancer and wanted to show her appreciation. The Disneyland workers in the costumes that day took me aside and explained that, while they weren’t supposed to talk to anyone, they couldn’t help but thank me -- it was the first time anyone had given them a gift before.

We still have pictures from that day everywhere around the house. And Minnie is still a big part of Celia’s life.

So when I saw the SumOfUs petition hit my inbox, it was personal. I was shocked, and thought, "what have they done to her?!" I cannot imagine what impact seeing a drastically smaller Minnie Mouse would have done to Celia's self-esteem as she battled cancer. When Celia saw the image, she burst into tears and asked if Minnie was sick like she was.

Minnie is simply not a skinny character. And when massive corporations like Barneys and Disney get together to manipulate a character in that way, preying on the love and trust children have invested in that character, they're trading real and lasting damage for a quick marketing hit.

When I tried to explain, Celia was angry, and argued that Minnie doesn’t belong to adults -- she belongs to children. I think Celia’s right. I think what Barneys and Disney have done is cynical and malicious and abuses the image of a wholesome, beloved character. And I’m proud to be standing up against it.

Thank you for taking the time to read my story,

Disney: Don't use your characters to promote unhealthy body images. Pull your support of Barneys' display.

83,089 signatures
16 signatures until 100k
SumOfUs will protect your privacy, and keep you updated about this and similar campaigns.